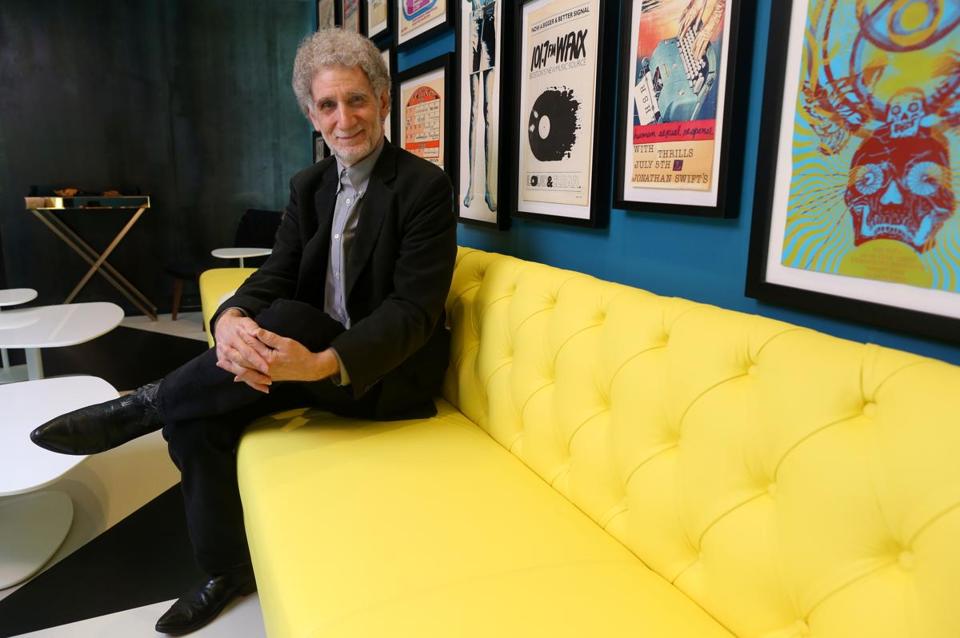 There’s some spectacular stuff hanging on the slate-blue lobby walls of the new Verb Hotel, the rock ’n’ roll revival of the old Fenway Motor Lodge. The centerpiece of the crowded display is a near-lifesize shot of a young, unclothed Mick Jagger, who is strategically holding a copy of the Rolling Stones’ infamous “Sticky Fingers” album cover: a close-up shot of a man’s crotch in a tight pair of jeans.

That and several other framed pieces — Lou Reed’s autograph, a poster for the Who’s gig at the old Boston Tea Party — are Rock and Roll Hall of Fame-worthy artifacts. But it’s not just the demigods of rock history who grace these walls.

“I couldn’t tell you for the life of me who Hymie and Glinda were,” said project curator David Bieber during a recent walk-through, referring to a hand-drawn flyer from a 1980 set at the old Cantone’s.

Bieber — a rock historian who worked for 16 years at WBCN and another 19 years around the corner at the Boston Phoenix — has traced Boston’s musical heritage from the psychedelic era and the corporate-rock successes of the 1970s to the hardcore and alternative movements and beyond. Now choice selections from his massive collection of memorabilia are the inspiration for the whole vibe of the Verb, which has a soft opening this weekend.

To read the complete article by James Sullivan of the Boston Globe: Amid a Fast-Growing Fenway, the Verb Hotel is a Blast from the Past.